Scratching A Writing Itch From Time To Time

Archive for the tag “travel trailers”

Never Too Late To Try Something New 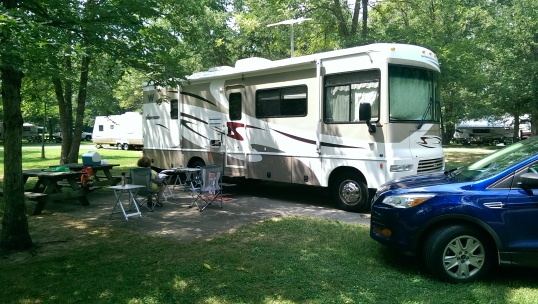 My wife and I have spent about six of the last ten summers renting a trailer to camp in when we go to Oklahoma.

It has been fairly easy. We pick the week. Call a guy who rents campers near the state park we go to.

Send him money. He brings the camper out, sets it up and picks it up when we are done.

No muss, no fuss for us.

Over all that time, we have been carefully watching others who own their campers to see if we could possibly do it ourselves.

One by one we ruled them out.

Pop-ups are too small.

Fifth wheels and travel trailers require a truck to pull them. A large truck. An expensive truck.

Plus, you have to hook them up, back them in when you get to the site.  We have watched people spend an hour or so trying to get set up. We aren’t possessed with that kind of patience.

We settled on looking at Class A motorhomes.  It’s kind of ambitious to start out with something that size but I’m not young enough to go through all the different sizes.

When we went out to seriously look, a shrewd salesman had my wife sit behind the wheel of the vehicle you see in the picture. Over the 23 years we have been married, I know the look when she falls in love with a potential purchase. Car, house.  It’s always the same look.

We had a lot to learn about the care and feeding of one of these beasts. Generators, electrical systems, how to dump the wastewater. Where to store it. The RV, not the wastewater.

I know what you are thinking by this point. Seems like a lot of fuss for a once a year trip. Well, we decided that with one of these  at our disposal, we could take weekend trips around our area.

We have been on three trips in the six weeks we have owned our new toy.  The people have been friendly. The weather has been good. It is a nice, relaxing way to spend the weekend.

We decided that waiting until the perfect time to do something like this could mean never getting the chance to try it.

We rolled the dice.